https://www.omahamediagroup.com/images/uploads/monster_gallery/Omaha-Media-Group-Black.jpg
2017 May 11
by The Creative Monsters 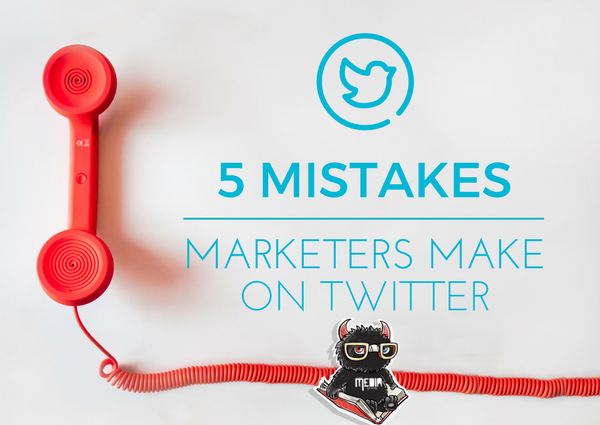 Twitter is still one of the most popular platforms used by people to share and exchange their ideas, express opinions, and promote news. With over 300 million active users, it isn’t a surprise that marketers use Twitter for their marketing purposes. However, with great power comes great responsibility. Small marketing mistakes made by marketers on Twitter can cost them dearly.

Here is a list of top 10 mistakes made by marketers:

At times, your customers may become unhappy with the product you sold them. They will use social media to vent out their dissatisfaction, especially Twitter. Their tweets might be offensive and mean, but that shouldn’t drive you to attack them publicly. As a company, you have much more to lose than your fellow customer. Always respond tactfully to avoid confrontation on social media.

It isn’t absolutely necessary to tweet every single day, but if you tweet once in a week, it is a problem. There is so much activity on social media that if you are just skimming the water, your tweets won’t be effective at all.

3. Only following people who think alike

Diversity often refers to race, gender, age, and other classes or groups. The majority of the people tend to forget about cognitive diversity. People who are cognitively diverse have different opinions and perspectives about everything. By only interacting with people who think the same way, you won’t get deep insights about your strategies or products. On the other hand, following people who disagree with what you have to say or what you to sell will show a different chain of thought and possibility. Keep your friends close, but your enemies closer is the perfect saying in the world of social media.

4. Overselling your products and brand

Sadly, it is possible to oversell your products and brand. Most social media marketers focus on their brand and products rather than building a good relationship with their followers. Take a look at any popular person on Twitter. They not only concentrate on sharing the message of their brand to divert more traffic to their page, but they also share third party content and build meaningful relationships with their followers.

Hashtags are probably the most powerful and cheapest (free in fact) tool Twitter offers to its users to improve the visibility of tweets. For companies that want to promote their brand, it is extremely useful. However, if you use too many hashtags or you fail to use the correct hashtags, your tweet won’t receive much response as people might think your post is too annoying or they won’t see it at all. Also, if you think you don’t have to use hashtags as you have sufficient followers, its high time you change that. Make sure that you have at least one or two hashtags per tweet.

Avoid making these mistakes and make your brand stand out from the rest of the competition.