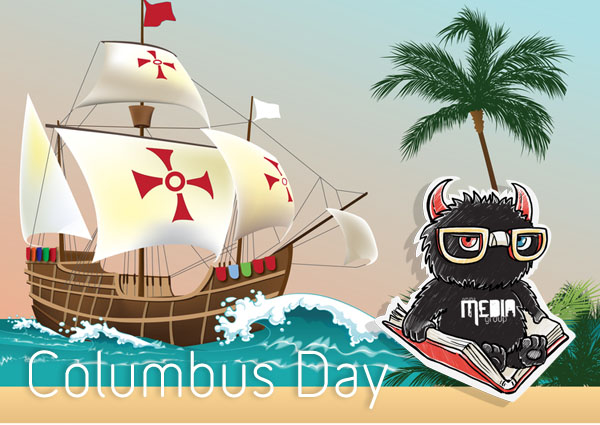 “Columbus Day is a national holiday in many countries in the Americas and elsewhere which officially celebrates the anniversary of Christopher Columbus' arrival in the Americas on October 12, 1492. The landing is celebrated as “Columbus Day” in the United States, as “Día de la Raza” (“Day of the Race”) in many countries in Latin America and as “Día de la Hispanidad” and “Fiesta Nacional” in Spain, where it is also the religious festivity of la Virgen del Pilar. It is also celebrated as Día de las Américas (Day of the Americas) in Belize and Uruguay, as Discovery Day in the Bahamas, as Día del Respeto a la Diversidad Cultural (Day of Respect for Cultural Diversity) in Argentina and as Giornata Nazionale di Cristoforo Colombo or Festa Nazionale di Cristoforo Colombo in Italy and in the Little Italys around the world. These holidays have been celebrated unofficially since the late 18th century and officially in various countries since the early 2000's of the century

Columbus Day first became an official state holiday in Colorado in 1906, and became a federal holiday in the United States in 1937, though people have celebrated Columbus's voyage since the colonial period. In 1792, New York City and other U.S. cities celebrated the 300th anniversary of his landing in the New World. President Benjamin Harrison called upon the people of the United States to celebrate Columbus Day on the 400th anniversary of the event. During the four hundredth anniversary in 1892, teachers, preachers, poets and politicians used Columbus Day rituals to teach ideals of patriotism. These patriotic rituals took themes such as citizenship boundaries, the importance of loyalty to the nation, and celebrating social progress.

Many Italian-Americans observe Columbus Day as a celebration of their heritage, the first occasion being in New York City on October 12, 1866. Columbus Day was first enshrined as a legal holiday in the United States through the lobbying of Angelo Noce, a first generation Italian, in Denver. The first statewide Columbus Day holiday was proclaimed by Colorado governor Jesse F. McDonald in 1905, and it was made a statutory holiday in 1907. In April 1934, as a result of lobbying by the Knights of Columbus and New York City Italian leader Generoso Pope, Congress and President Franklin Delano Roosevelt proclaimed October 12 a federal holiday under the name Columbus Day.

Since 1970 (Oct. 12), the holiday has been fixed to the second Monday in October, coincidentally exactly the same day as Thanksgiving in neighboring Canada fixed since 1959. It is generally observed nowadays by banks, the bond market, the U.S. Postal Service, other federal agencies, most state government offices, many businesses, and most school districts. Some businesses and some stock exchanges remain open, and some states and municipalities abstain from observing the holiday.The traditional date of the holiday also adjoins the anniversary of the United States Navy (founded October 13, 1775), and thus both occasions are customarily observed by the Navy (and usually the Marine Corps as well) with either a 72- or 96-hour liberty period.” [source]

Check out “The True Story of Christopher Columbus” over at MyFreedomFrontier.com!