https://www.omahamediagroup.com/images/uploads/monster_gallery/Omaha-Media-Group-Black.jpg
2016 February 09
by The Creative Monsters 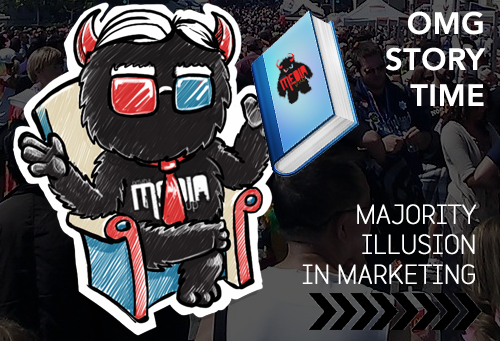 Majority Illusion, in layman's terms, is the contagious behavior spreading through a population.  Basically, copying each other to the point where a social network dramatically skews an individual's local observations, make a behavior appear far more common locally, than globally.

For example, the Netflix original docu-series, Making a Murderer.  Didn’t it seem as though everyone was watching it simultaneously at the same time?  Marketers can leverage the majority illusion to create the needed drive to spread a message as far and wide as they can.  By hitting their target demographic, they can influence others to amplify their message.

Have you ever been surprised when your friends are completely unaware of major news in your  own “marketing world”?  ‘Marketing world” being the world of your own interests.  You assume it’s popular because you’re seeing it discussed relentlessly in your network, giving the impression that it’s popular universally.  The truth is, social media is likely smarter than we are.  They are able to gather our interests, put us in our own little corners of the marketing world, and populate these “viral” pieces to us, making us think the entire world is seeing what we’re seeing.

By observing the structure of a social network, it’s evident that a lot of followers don’t necessarily equate to influence…even though it seems that “everybody's doing it” with Majority Illusion.  Reaching a large audience takes effort, and enlisting target influencers in an excellent strategy.

If you're looking to find a marketing strategy using Target Influencers, contact us today! We can help with your “illusion”.