https://www.omahamediagroup.com/images/uploads/monster_gallery/Omaha-Media-Group-Black.jpg
2019 May 29
by The Creative Monsters 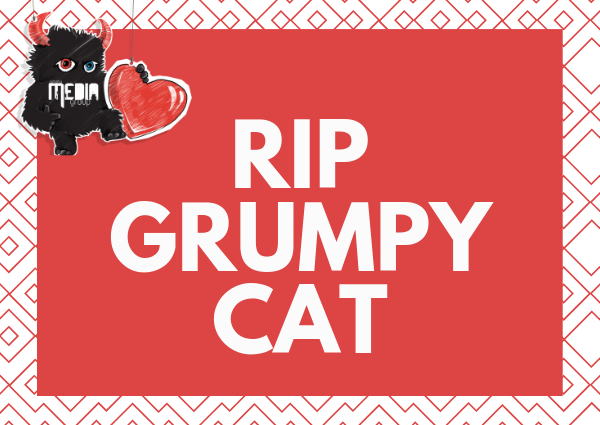 As a seasoned digital marketing agency, our industry houses its own “legends”, if you will. The viral kings and queens of the internet.

There’s Randall, the Honey Badger narrator. A sassy, flamboyant and hilarious character that, well, “doesn’t care” and “just does what it wants”.

Heck, there’s even a game inspired by such legends. Who was, quite possibly, the most viral character of them all? For our digital marketing agency, “Grumpy Cat” takes the cake.

Officially named Tardar Sauce, a.k.a., ‘Grumpy Cat’, was a seven-year-old internet sensation. She first made her way to the web via Reddit in 2012 and received over one million views forty-eight hours.

If anyone knew anything about viral content, it’s Tardar Sauce. In fact, some social media experts claim ‘Grumpy Cat’ to be the first ever viral meme. Those are large shoes (er…paws) to fill, but the grumpy cat did it.

It was a sad day when word broke of Tardar Sauce’s passing on Tuesday, May 14th, 2019 due to complications from a UTI. It was like a little piece of the internet died right with her.

Our very own digital marketing agency has passed on handfuls of GIFS and memes of ‘Grumpy Cat’ throughout the years, and we’re happy to have used her face to spread laughter throughout the office. From subdued birthday wishes to expressing disdain for the cold weather - ‘Grumpy Cat’ has always been there for us.

And for that, we thank you, Tarder Sauce.

What can a business learn from ‘Grumpy Cat’?

Now, we’re hard-pressed to think there will ever be another legend like ‘Grumpy Cat’, but as we said, the internet is weird, and something will pop up eventually.

Viral content needs to be insanely catchy. First-glance kind of catchy. If your content doesn’t make your audience do a double take straight out of the gate, don’t plan on catching the viral fever any time soon.

However, if something does start to stick, it’s important for a business to keep building on it. Don’t let it get stagnant. Hire a professional that knows how to take an idea and build off of it. That’s what Tardar Sauce’s manager (owner) did.

Businesses can also use ‘Grumpy Cat’s’ life as insight to social media and what it means to embrace a brand voice. ‘Grumpy Cat’ wasn’t just a meme, she was a “tone”. She was dry, sarcastic, witty and versatile in her own way. The perfect brand voice.

So, as the world says goodbye to the beloved Tardar Sauce - the subdued ‘Grumpy Cat’ - think of your brand and what you can do to embody a character as a company character.

Has ‘Grumpy Cat’ every crossed your Slack channels or social media?

Our digital marketing agency lives for developing a brand voice!