https://www.omahamediagroup.com/images/uploads/monster_gallery/Omaha-Media-Group-Black.jpg
2020 February 12
by The Creative Monsters 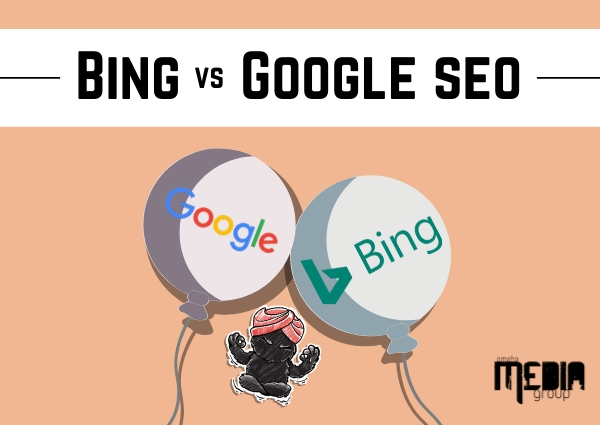 What is the first search engine that comes to mind when a company says “SEO”. For the majority of the globe, Google will be the first one that is considered following with Bing and Yahoo! While Google continues to rank first in the United States- Bing is not far behind with being the third highest ranking search engine in the United States. On average, there are 12 billion searches worldwide on Bing with their biggest demographic being searchers between the ages of 45 to 54 years old with an average annual household income of $100,000.

Slowly, but surely, alternative search engines from Bing to DuckDuckGo are becoming increasingly popular with consumers all over the globe, and dependent on the industry, a company needs Bing SEO sooner than later.

Here are the biggest differences between Bing and Google SEO along with bing SEO tips!

One of the biggest differences between Bing SEO and Google SEO is keywords. Google is constantly optimizing their algorithms and processes to continue to provide searchers with the most relevant search results for their queries. In 2019, just about every single month there was a Core Algorithm or Update released that Google was working on. From Panda to BERT, Google is constantly optimizing to make sure that keyword phrases are populating those relevant searches.

On the other hand, Bing has been a bit slower to adapt to this same process when it comes to Bing the exact phrase a searcher would search is what you should use as a keyword. Be straightforward and completely relevant to what someone would search. If the search query was “best pizza restaurant” you want to put exactly “best pizza restaurant” in the headings and content. Straight-forward is better!

There has been research studies and debates about social media followers and links help to increase a website’s ranking in Google. The general consensus is that it does not directly correlate with ranking on Google's SERPs.

Ready for this bing SEO tips, social media matters for ranking on Bing! Bing is known to take the social signals of a page into account on their SERPs. The more a specific link has been shared or retweeted, the better it will do in Bing’s overall ranking! Bing, which is part of Microsoft, might take this into account since LinkedIn is owned by Microsoft and Microsoft was one of the first investors in Facebook!

When a search query is “best pizza in Omaha” a search result will display the best restaurants on Google with ads, Map pack and other results. This is pretty normal for Google, but the opposite goes for Bing.

If you are a pizza shop in Omaha, it is imperative to make sure that your URL is part of this exact match. This is one of the top ranking factors in Bing when it comes to the top 10 ranking.

A URL on Google will be “deliciouspizza.com” and on Bing it will be “Omahabestpizza.com”. No, do not completely change the domain to rank of Bing, but make sure that H1 and H2 titles are very straightforward with keyword phrases and search queries!

Those are the three biggest differences for SEO when it comes to Bing versus Google SEO factors! For help optimizing a website for both of these search engines, give us a call today!

Bing, Google or both- we can optimize for it all!

Get ranking on Google and alternative search engines with our help!