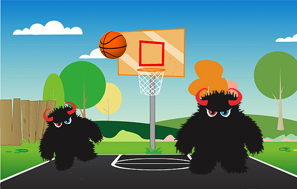 It’s that time of year again: basketball season! It’s hard to escape the constant stream of chatter around the office water coolers about the upcoming March Madness tournament. We love March Madness for a few reasons, not the least of which is an appreciation for the sport itself. Further enforcing our love for March Madness, there are also numerous ways that the tournament relates back to the web hosting industry. March Madness makes us think of databases full of statistics, streams of traffic being expertly balanced, and gives us even more opportunities to collaborate with our fellow Heroes.

In the old days of March Madness tournaments, the sheer amount of information that needed to be sorted through to generate brackets created quite the barrier to entry. These days, highly available server clusters use giant MySQL databases to store March Madness results. This not only saves time and brain power for participants, but also opens up the brackets to be played nationwide. This technology allows anyone with the slightest inclination to form their own March Madness pool. Practically anyone can create a bracket, invite friends to join in, set their picks, and then sit back, letting the databases and servers do all the hard work. We love it when technology makes life (and basketball) easier.

All About That Traffic

During the few weeks that encapsulate March Madness, any website providing brackets or related data (particularly March Madness Live) sees an exponential increase in traffic. Visits to the March Madness site alone added up to over 220 million in 2012. Traffic has only been increasing since then, up 42% for the first three days of the tournament in 2014 compared to 2013. While increased traffic is a great problem to have, it does present a few issues for the servers that have to handle that load. This time of year, all across the nation, servers are being scaled up and load balancers are being configured to ready themselves for the upcoming traffic hit. Scalable and highly available infrastructure like that are exactly the kind of solutions our techs like to think about.

Of course, the best part about all this March Madness hullabaloo is the atmosphere that is fostered this time of year. Playful competition and rapport among OMG Family abundant in the break room and water cooler areas around the office. OMG has always believed in creating and cultivating a friendly work environment; one that encourages employees to become friends and share knowledge. We believe techs that work together find themselves more readily equipped to help our customers. For that reason, March Madness is a celebrated time of year around our data centers.

March Madness is about more than basketball – there’s a whole treasure trove of technology and information supporting all the fun and games this time of year. We love nothing more than when popular culture merges with one of our our favorite subjects: web hosting. When you go to fill out your bracket this year, don’t forget to appreciate all the technology hiding behind your computer screen.

Best of luck with your brackets!