https://www.omahamediagroup.com/images/uploads/monster_gallery/Omaha-Media-Group-Black.jpg
2021 September 17
by The Creative Monsters 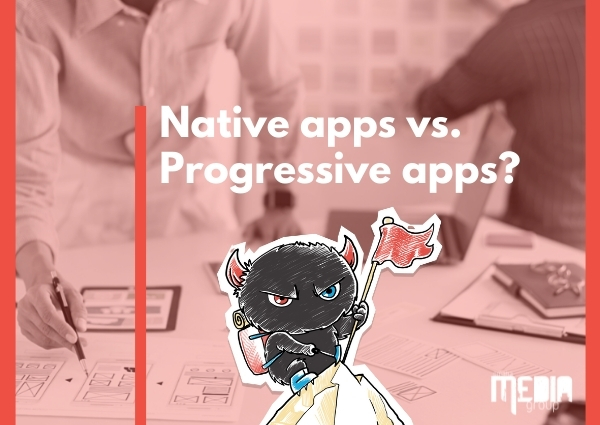 There are two different types of apps out there, but one of them isn’t necessarily a traditional app. There are apps on the internet and apps on your smartphone, and for any company considering releasing an app, it is important to consider all options.

A great example of a PWA is Twitter. The social media platform can be downloaded as a native app, but on a desktop, it is like a website. The functionality of the desktop or the native app is the same, and provides the same experience and functionality to users, but provides the ability to login and use it virtually anywhere.

A native app is an application that is downloaded from Google Play or Apple Store. Native apps are built for specific software such as Android and iPhones only. This means that the user can only download the app via the stores listed above and there is more than likely not a website attached to the app.

While they both have their own pros and cons, but which one would be better for your company?

On the other hand, for a company that has a smaller budget but wants to release an app that can be reached while users are off-line without using a significant amount of their mobile data, a progressive web app would be best.

What if a company wants the benefits of both? This is a common occurrence in today’s digital age. A great example is Pinterest, Facebook, Amazon, YouTube, Instagram, BeachBody, Tinder and so many other companies out there with native apps.

This can create the perfect omnichannel marketing strategy while bringing in customers on several different devices.

Think With Google states that the i-want-to-know, i-want-to-go, and i-want-to-do actions all generally take place within apps. Where do consumers go? Well, one of the first places is an app store, but one in four consumers use search engines to discover new apps.

Whether they are watching an Influencer on Youtube or searching for more information, search engines are a large part of the discovery stage.

61 percent of searches happen on a mobile phone, while 31 percent happen on a desktop. While mobile search does account for more and more search queries, the results still populate the same. Don’t forget about advertising on the search engine as well!

A great example of a company that is utilizing PWA and native apps is Pinterest.

As stated above, it provides the in-app experience without needing to be on the app itself, which differentiates it from a responsive website.

The company states that the changes were necessary due to two main reasons - their target audience and data-driven.

Pinterest’s research showed two things: a large majority of their audience was not located in the United States, and with slower bandwidth, this hurt the users. The second thing was a larger amount of unauthentic users were creating accounts that destroy any data and analytics.

With their target audience and future in mind, Pinterest made the leap and it turned out to be brilliant. Pinterest generated $756 million in 2019 and was projected to increase that by 61 percent in 2020.

As the company continues to expand, its PWA and native app work hand-in-hand to provide the best experiences for all of its consumers.

Native apps and progressive apps are two different options that provide two different experiences for consumers. Both are important to take into consideration when searching for an app development Omaha team to help with the process.

Omaha Media Group is one of the leading creative management firms in the Midwest. With our talented in-house  team of website developers, designers, and app developers, we can provide the best native or progressive app in the market.

Learn more about our app development services or any of our other digital services! Contact us today.