Top UI Design Trends that Made it Big in 2017

Top UI Design Trends that Made it Big in 2017 /images/uploads/blog/2017_top_ui_website_design_trends_omaha_media_group.png Omaha Media Group

https://www.omahamediagroup.com/images/uploads/monster_gallery/Omaha-Media-Group-Black.jpg
2017 December 08
by The Creative Monsters 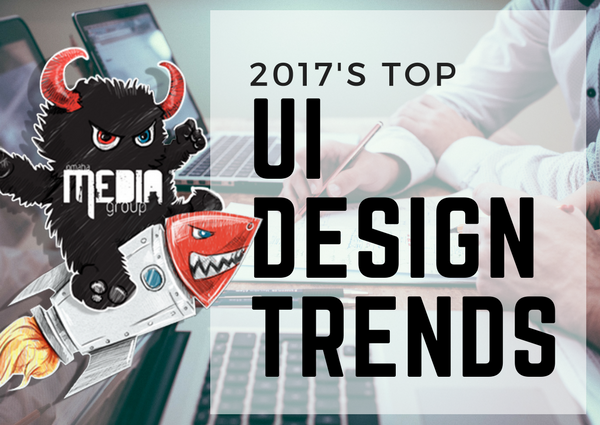 With the lightning-fast transformations in the digital technology, the web design trends to keep changing almost every day to keep up with the consumer trends. Every year, the UI and UX design industry undergo major metamorphosis to not only stay relevant to the needs of the consumer but also to keep inspiring novel innovations. Here is a list of the some of the hottest trends in the UI design industry in 2017 that you might want to know about.

While the concept of Virtual Reality is much older than you can imagine, the trend has picked up momentum only recently and is nowhere to transform the very fabric of UI design in a tremendous way. One great example of the VR in the world of UI is the use of 360-degree videos to showcase a product in a more realistic manner. The promo campaign by Peugeot 208 incorporates the VR and 360-degree technologies to provide an immersive and captivating visual experience to the customers in 3D.

Another great innovation that has further promoted seamless consumer interaction is the advent of conversational UI that manifests itself in the form of chat windows, messaging and so on. Since more number of people are now driven towards technologies that allow them to communicate with the others without actually having to talk with them, software such as Facebook Messenger, Slack, WeChat and such have emerged as massive hits. That being said, more and more companies are now introducing conversational user interface in their website to allow better and faster approachability to the customer through chats and messages rather than them having to call up the customer care for every trivial query.

The quality of visual imagery has been undergoing major transformations given the advancements in digital technology and the full-screen videos are indeed the next big thing in the world of UI design. It goes without saying that videos, in general, have always had the power to better grab and retain the attention of the target viewers as compared to other forms of content such as text or static images. That being said, 2017 has been the year when these videos have been made full-screen to make the user engagement more immersive and larger than life.

Minimalism is taking over

With a greater focus on the usability and functionality of the websites and applications, technology experts have now moved on to adopting the minimalist approach in designing UI that is simple to read and work through. The major focus is on the functionality of a particular page by eliminating the additional noise of irrelevant clutter. More creative grids are being now incorporated to create page layouts that majorly highlight the important functionalities and tools and do away with any overlapping patterns and designs. In addition to that, designers are now focusing on incorporating original photography instead of stock photos for creating a more unique and innovative brand image.

Let us get you on trend with your website design!