5 Digital Marketing Stats from 2017 to Make Note Of

https://www.omahamediagroup.com/images/uploads/monster_gallery/Omaha-Media-Group-Black.jpg
2017 April 19
by The Creative Monsters 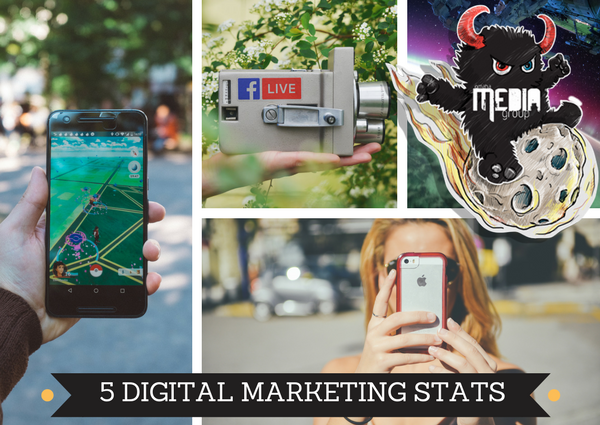 Mindshare recently released a report that suggests that voice technology has been driving a significant emotional connection between brands and their users. According to a Neuro Insight study, the level of emotional activity is double when consumers used voice technology to ask questions instead of typing them out. Nearly 37% of all smartphone users are already making use of some kind of voice technology at least once per month.

Reports suggest that around 51% of the Snapchat users in the U.S. aren’t engaging with its branded lenses or filters (JP Morgan Chase study from March 2017). Further, 73% of the users don’t actually swipe up (this equates to a click-through) and 68% never bother to watch the video advertisements.

Trying to figure out if people are still addicted to Pokemon Go? Well, this unique mobile game managed to attract several million users who downloaded it on their phones and tabs last summer. Niantic is the company that launched this app and it recently revealed that Pokemon Go still has over 65 million users per month. So even though there has been a significant drop in its user percentage, it continues to drive maddening foot traffic to certain locations, making it a lucrative ad purchase for retailers.

4. Poor use of AI (artificial intelligence) by retail brands in the UK

According to a Qubit report, most brands, especially in the retail sector, are not investing in AI or artificial intelligence, even though they acknowledge its potential. 82 percent of the brands are of the opinion that the retail sector will be impacted by machine learning. However, only 48 percent of these brands are actually making use of AI in their current business operations. About 82 percent of the brands are looking to spend less than 1 million pounds for introducing new technology. Only one-third of the total retailers in the UK actually have a planned strategy for collecting and analyzing data from across various channels.

5. Drop in consumer loyalty due to security breach threats

Cisco and Retail Week recently released a report which discussed how retailers and consumers have been affected by data breaches. About 2,000 consumers were surveyed to prepare the report and around 72 percent said that they were unlikely to buy/do business with a brand or company which has been involved in a case of data breach. In cases when the personal data of the consumer had been misused, nearly 9 out of 10 respondents claimed that they would minimize purchase if the company failed to take appropriate measures to rapidly solve the problem.

Before we end the post, here is another noteworthy stat related to the consumption of news in the U.S. Reports reveal that an average of 73.5bn minutes per week are being spent by U.S. consumers in news content consumption indicating an annual hike of 18 percent.