December SEO Notes: What is happening in the industry

December SEO Notes: What is happening in the industry /images/uploads/blog/Omaha-Media-Group-Blog.jpg Omaha Media Group

https://www.omahamediagroup.com/images/uploads/monster_gallery/Omaha-Media-Group-Black.jpg
2020 December 29
by The Creative Monsters 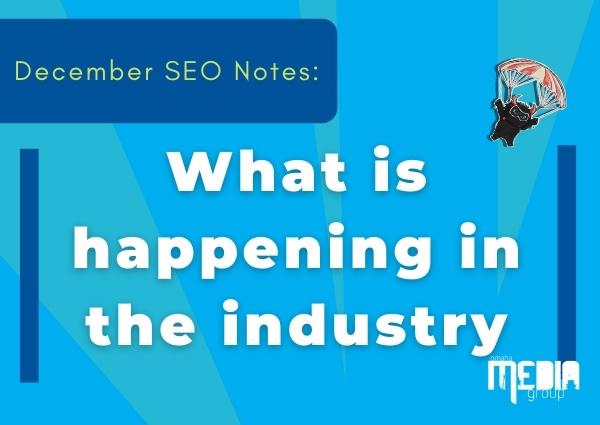 As one of the leading creative management firms in our area, as an SEO expert company, Omaha Media Group always tells clients that there is always an SEO change happening, but some are nothing to worry about, and others are worth the notation and watching your accounts.

A client and others will see their ranking increase or decrease, however, this is nothing to alarm yourself with. This is because you want a natural “heartbeat” to all SEO strategies. Your ranking should fluctuate with changing keywords, backlinks dropping and adding and updates that happen, but the important thing is to see a steady increase or slow incline in ranking again once this is over.

From here, what are some of the biggest updates in our industry that any SEO expert company should be aware of and their clients alike?

In the beginning of December, Google released their first Core Update in seven months! In the past years, the updates have been every couple months, but this time this one was quite the wait.

Timeline leading up to the Core Update

In February, our experts reported that volatility was higher than average, and again in March, but there was never any definite reporting or press releases stating that there was an update released. Around April, several bugs and different notions were launched and fixed, and with COVID-19 in the middle of its first spike, Internet traffic was surging.

However, in May Google’s Search Liaison, Danny Sullivan, and Google’s WebMaster, John Muller, released statements that confirmed a Google Core Update had indeed started on May 5, 2020.

RankRanger called the May Core Update a “monster” of an update compared to January’s 2020 Core Update and September’s 2019 Core Update. Why is this? This is because this broad update focused both major industry updates across the board and niche industries.

SEMRush has stated that the core update in May of 2020 is, “stronger and influences more SERPs and positions.”  This means that this update is affecting organic rankings and website’s positions in Google’s search engine.

A number of SEO experts have explained in the short time frame, some of their clients have lost 90 percent of their rankings but others have gained from this same update.

However, experts are saying that the December Core  update is even larger than the “Monster” of the update that happened earlier this year in May.

What is the December Core update all about?

With this in mind, Search Engine Land estimated that this core update this month was even bigger than the May update.

With most updates, there are industries who are hit harder than others, and this round in the updates, these are the hardest hit ones:

As an SEO expert company, it isn’t uncommon to see these industries hit harder than others. What does it mean to be “hit harder” than others?

The industries that are hit harder are the ones that will notice a massive increase or decrease in their overall ranking from the number of backlinks to the number of keywords they have, and with this in mind, the ranking on SERP.

With such large Core updates continuously happening, what can a company do if they notice that their ranking is declining time and time again?

It takes about two weeks, on average, to start noticing any decreases or increases based on Core Updates, but as usual, Google states that any company following their guidelines should bounce back with no need to worry. The December update has had two large waves which is unusual for most updates.

The “waves” of the update is when SEOs start to notice that there is something coming, but these “waves” don’t always result in an update as February and March proved to us this year.

These waves are the update or changes taking its course. These waves are when companies notice their ranking either go up or go down, but no matter the outcome, do not be alarmed, unless you are working with a black hat SEO agency, you will level back out.

For more information regarding SEO, Core Updates or starting your SEO strategy this new year, contact us today!

Contact us for a Google Meets or Zoom meeting!